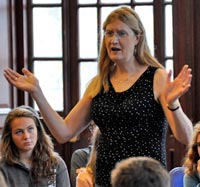 What does it mean to be transgender? What is gender identity? This year’s Talbot Speaker, Professor Jennifer Finney Boylan, answered these questions for students and faculty, with charm, personal anecdotes, and compassionate advice. Professor Boylan is the inaugural Anna Quindlen Writer-in-Residence at Barnard College and the author of She’s Not There: A Life in Two Genders.

“The question is not how you go from being a man to a woman, or a woman to a man,” she said. “The real question is: How do you live an authentic life? How do you be you, out in the world? That well-intentioned advice, ‘Just be yourself,’ can be the most difficult advice to follow.”

Professor Boylan shared how she “came out” to her conservative, religious mother, who was 85 years old at the time. Her mother’s response, “It’s impossible to hate anyone whose story you know,” became Professor Boylan’s approach in educating people about LGBTQ issues. During assembly, she read her own powerful story, “The Early Morning Rain,” which she revised for an anthology around the 2010 It Gets Better Project, aimed to help young people questioning their own gender identities.

The importance of being a “good ally” to a friend who is struggling with his or her identity is an important message for students, and Professor Boylan offered advice about being supportive. “It’s okay not to know or understand everything about transgender people. ‘Transgender’ is a broad term that covers a lot of situations,” she said. “More important is the compassion and love you offer to people who are different from you. Open your heart, even before you have all the facts. Let your friends know you have their back, even if you don’t understand everything.”

A novelist, memoirist, and short story writer, Professor Boylan is also a nationally recognized advocate for civil rights. She has appeared on the Oprah Winfrey Show; Live with Larry King; the Today Show, the Barbara Walters Special, NPR’s Marketplace and Talk of the Nation; she has also been the subject of documentaries on CBS News’48 Hours and The History Channel. Before her teaching appointment at Barnard College, Ms. Boylan was a professor of English at Colby College for 25 years.

The Samuel S. Talbot ’65 Memorial Fund for Counseling and Community Issues, established in 1993, enhances the School’s efforts in teaching members of the community about affective behavioral issues. This year, Milton’s counseling office, having gathered extensive input from students, chose to help educate about gender identity. Transgender children, teens and adults are at greater risk for depression, bullying, becoming targets of hate crimes, social isolation, and suicidal thoughts and actions. This increased risk is due to the discrimination and oppression of transgender people.