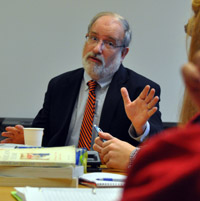 This year’s Henry R. Heyburn ’39 Speaker, Jim Cullen told students their “inheritance” is today’s America of prosperity and political stability, true since the end of World War II. Mr. Cullen, chair of the history department at the Ethical Culture Fieldston School in New York City, yet warned that this “overstretched empire is starting to contract.”

“In the twenty-first century, it’s apparent that the frontiers secured by the Second World War are under pressure; in some places, they are actually collapsing,” said Mr. Cullen. “There is talk of debt, decaying roads and bridges, and foreign competition. Closer to home, you hear how challenging it is to get into a good college, how hard it is to afford college, and how difficult it is to get a job with health insurance.”

Mr. Cullen wasn’t intending to deliver a “prescription for doom”; this ongoing decline is gradual, he says. “The smartest thing to do is act as though things will go on as they have before. … Chasing the American dream is your birthright, even if you were born somewhere else.”

Part of his job as a historian, Mr. Cullen says, is to teach how history can be useful to us.

“Your job is to learn how to listen. Listen actively and give people—teachers, little sisters, supermarket clerks—a chance to have their say, and ask them questions. Then ask yourself: What does [their story] have to do with me? Are their dreams or circumstances much different than mine? The answer is not likely to be obvious, but the payoff will be that, now or later, some shard or memory of those answers will buck you up or give you hope. That is what history is: it’s the hope business.”

Mr. Cullen earned his B.A. in English from Tufts University, and his A.M. and Ph.D. degrees in American civilization from Brown University. He is the author of a dozen books, including The American Dream: A Short History of an Idea that Shaped a Nation, which was a summer reading book this year. His next book, A Brief History of the Modern Media, is slated for publication by Wiley-Blackwell in 2014.