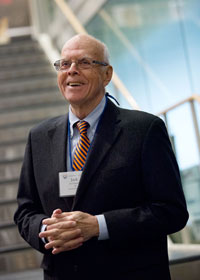 On January 23, the Milton Academy Board of Trustees awarded the Milton Medal to Jack Reardon, Class of 1956—a longtime trustee and a wise and loyal supporter of his School.

Head of School Todd Bland recalled the dinner meeting in 2008 that he and his wife, Nancy, shared with Jack Reardon and Board President Brad Bloom—an evening which solidified Todd’s decision to serve as Milton’s head of school. He spoke about the supportive care and insight that Jack reliably and generously provided throughout Todd’s last six years. Similarly, Brad Bloom credited Jack with his own willingness to assume the presidency of Milton’s board. Brad noted, in particular, Jack’s ability and willingness to listen, and his effectiveness in helping institutions understand what challenges should be addressed, and what changes should occur. “Four heads of school—Ed Fredie, Robin Robertson, Rick Hardy and Todd Bland—and four board presidents—Harold Janeway, Marshall Schwarz, Fritz Hobbs and I—sought his counsel,” Brad said. “In every conversation, public or private, Jack is steady, calm, and focused on the point. He responds with candor, wisdom and sensitivity, regardless of the issue. He frames the importance of a decision in few but relevant words. We all try to understand the full measure of each of those words.”

As he delivered the Milton Medal Award, Brad summoned Mr. Frank Millet’s words about Jack from just that week: “Jack has a wonderful way with people. When you talk with him, you know that you have his full attention. If you want something, he will do the best he can to honor that. He’s regularly in contact with many people and he has many friends. He understands the essence of a person, no matter the person’s age. He’s been devoted to Milton since 1956. He’s a very loyal person.”

“Jack’s service to Milton has been vast, deep and meaningful,” Brad concluded. “He epitomizes the life and spirit of Dare to be True. Jack, we are aware and most grateful for your decades of commitment, engagement and service to Milton. Please join me in thanking my friend and mentor, Jack Reardon, recipient of the Milton Medal.”

Citation from the Milton Medal Program

Jack Reardon was elected to the board of trustees in 1991. With skill, loyalty and generosity, Jack supported every aspect of Milton’s institutional strength until and beyond his retirement from the board in 2013. Jack began by chairing the campaign steering committee in 1992 that prepared for Milton’s first comprehensive capital campaign. “The Challenge to Lead” raised $60 million from 1995–2000, and expanded the supportive connections with alumni and parents that would be a critical foundation for meeting Milton’s aspirations in the future. Jack chaired the Trustees Committee during his tenure, guiding trustees and trustee practices, informed by his unfailing acumen about matters of governance. That position signaled a much broader portfolio: trusted emissary, diplomat, counselor, honest broker, or change agent when that was necessary. On the board and in the School, Jack was an astute listener, and always promoted the broadest possible understanding of an issue. Co-chair of the search for Head of School Todd Bland, Jack implemented a process that stands as an example of open, responsive communication with the full Milton constituency. Milton is extremely grateful for Jack’s seemingly limitless service over 22 years, helping Milton to be both daring and true, always; he has prepared Milton well for the future.