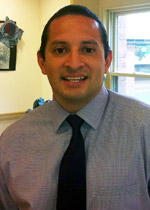 This summer Milton will welcome José Luis Ruiz as the School’s new dean of students. José was most recently the associate dean of students and director of residential life at St. Mark’s School in Southborough, Massachusetts. José has been active in independent school life for many years and in numerous, valuable roles. He is a graduate of Westminster School in Simsbury, Connecticut, and has worked in independent schools for the last 13 years.

José’s experience in the classroom is extensive; he taught both introductory and advanced levels of Spanish at St. Mark’s and at Westminster. José majored in Spanish at Middlebury College and has completed work toward his master’s in education at Teachers College of Columbia University.

As director of the residential life program at St. Mark’s, José supported a staff of 11 dorm heads in managing their houses and oversaw all aspects of dormitory life. He helped implement school-wide initiatives in student life, advising, discipline and health services. In his role as associate dean, José worked most closely with the school’s student leaders, supporting and overseeing their selection process and programming.

A leader in school diversity work, José was director of diversity at Westminster where he developed strategies for recruiting faculty and students of color; identified culturally significant speakers who would be effective on campus; and worked closely with students of color and their families. José has several times led sessions at the NAIS People of Color Conference and has attended many diversity and leadership institutes of stature, including the Gardner Carney Leadership Institute.

José will begin his new role at Milton on July 1 and will live on campus with his wife, Carol, and their two daughters, Adriana and Alyssa. Please join us in welcoming José and his family to Milton.