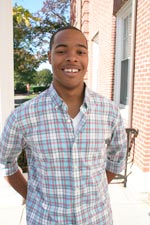 Principal Sarah Wehle invited students to speak about themselves and their ideas at Monday morning assemblies. Joseph Reynolds, Class II, was quick to take up her offer.  While everyone in the Milton community was reading Barbara Ehrenreich’s Nickel and Dimed: On (Not) Getting by in America this summer, Joseph was on the telephone with people who populated the pages of her book.

Joseph officially responded to complaints by “constituents” about “maladministration.” His unpaid internship positioned him as an ombudsman in the Public Advocate’s Office in New York City.  This Office is influential—it’s “second to the mayor’s office,” Joseph says. “We handle all the complaints that New Yorkers have about city, state or federal agencies.”  The ombudsman categorizes a complaint and then “speaks to the constituent to figure out the heart of the issue.”

Next, he finds the related agency—“Housing Preservation and Development, the Department of Health, the New York Police Department or the Federal Bureau of Investigation, for example,” and completes a communication loop that ends with informing the constituent about the resolution of his or her issue. “Once all of that is done, you have closed a case. This summer I closed 72 cases,” Joseph says, “some more extensive than others.”

Joseph’s job is an option in the Public Policy Internship Program. The job required a project on a public policy issue, and “the public policy issue I focused on was the minimum wage,” Joseph explains. For the students in the audience, Joseph outlined the difference between the concepts of minimum wage and living wage. The working poor might make a living wage of $10 an hour. “Some of you probably worked this summer and know what it feels like when you make $10 an hour and spend it shopping or on video games that weekend; however, some people have to survive on that amount of money.”

“These are the people who were calling me with complaints and pleading for help,” Joseph says. “My supervisor told me not to get attached to any cases because when the agency’s response is not in favor of the constituent, that’s hard. Alas, she told me this a couple of weeks into my internship. After speaking with a woman for two minutes about her situation, the woman started crying. She had no money to afford what needed to be fixed, her children were suffering, and they didn’t have a lot of food. I spent 45 minutes on the phone with her trying to keep her calm and trying to think rationally. But there are just cases that get to you. I felt terrible because I had no idea how the agency would respond to her situation. I realized, however, that sometimes people just want to be heard. She only wanted me to listen to her story, and to help if I could.”

The “already poor,”  Joseph concluded, have been forgotten as the nation’s media focuses on the impact of the recession, the move from excess to restraint.  “After reading Ms. Ehrenreich’s book and her article, doing my research and project, and finishing the internship, I became more appreciative. I didn’t mind that the air conditioner was off, because I had spoke to someone that day without one. I wasn’t upset that the Cinnamon Toast Crunch was finished, because I knew someone who probably couldn’t afford milk. Now it’s easier for me to see the value of each nickel and dime, and I’m glad I read this book.”