Journalism, the New India, and an “Almost American Life” 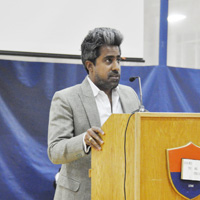 Journalist Anand Giridharadas had an “almost American life” growing up. Born in Ohio, the son of Indian immigrants, he shared with students the story of what led him to live in India for six years. A New York Times columnist and the author of India Calling: An Intimate Portrait of a Nation’s Remaking, Mr. Giridharadas was this year’s Hong Kong Distinguished Lecturer.

Growing up outside of Cleveland, Mr. Giridharadas was constantly asked where he was from because of how he looked, despite his American accent and upbringing. “My sense of India was a place my parents chose to leave,” he says. “When we visited, it seemed like a stagnant, slow moving place.” As a young, aspiring writer, he decided to challenge his feelings toward India and move to Bombay. Within a year, he was working as a journalist for the International Herald Tribune.

“Once I was out in the streets, talking to people as a journalist, I began to see glimpses that India was changing. The country I grew up with in my mind was in the middle of giving way to a different India. It was a revolution from within … The changes had to do with people revolting against parents who told them they would be a doctor or a lawyer, or who they would marry … You had millions of people starting to say to themselves that destiny is what you make it.”

Ironically, during his years in Bombay, the question, “Where are you from?” continued. This time the question came from Indians trying to “pigeonhole” his parental lineage, a vestige of the old India. Mr. Giridharadas said the “new individualism” happening in India can be seen around the world, whether caused by political upheaval, economics, or other internal forces.

“Half of the world was asleep, but these countries are waking up,” he says. “This poses a great opportunity for you all, but also a big threat. There are more people becoming good at what you are good at, and they are like broncos coming out of the gate.”

The Hong Kong Distinguished Lecture Series brings to campus speakers who raise awareness about issues of concern in Asia and help us better understand the cultures, art, and history of Asian countries, which are home to many of our students. Former trustee, Helen Lin, Class of 1981, along with more than 100 graduates living in Hong Kong, established the series in 1998.

Where are you from?