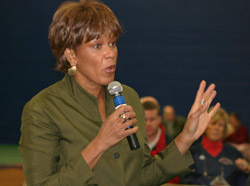 Award-winning journalist Liz Walker visited Milton’s campus on Wednesday, December 12, as this year’s Margo Johnson Speaker. Liz is host and executive producer of Sunday With Liz Walker, a half hour news magazine on WBZ Television. She joined WBZ in April of 1980 and anchored the station’s evening newscasts for almost 20 years. She is the recipient of numerous regional awards, including two Emmys and the Edward R. Murrow Award.

Liz Walker also co-founded My Sister’s Keeper, a humanitarian group building a girls’ school in the village of Akon, South Sudan, and produced a documentary about the organization’s work called A Glory From the God. An advocate of women’s issues, she co-founded the Jane Doe Safety Fund, a statewide service group for victims of domestic violence. Liz sits on numerous community boards and is a spokesperson for people living with HIV/AIDS, breast cancer survivors and at-risk youth.

During her visit, Liz spoke to Classes I–IV in the Athletic and Convocation Center during second period, followed by a discussion with students in Straus Library during third period.