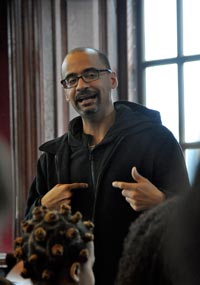 Pulitzer Prize-winning author Junot Díaz spoke with students this week not only as a creative writer, but also as a Dominican-American immigrant and an activist. Hosted by Milton’s student Latino Association, Mr. Díaz spent the morning answering questions from a packed room of students, on topics ranging from the writing process to the response to Ferguson, from gender equity to immigration.

With a personal history grounded deeply in the immigrant experience—Mr. Díaz came to the United States when he was six years old and grew up in New Jersey—he said that much of his own writing is informed by what he knows and what he experienced. “However,” he said, “there are endless ways to approach any craft. When your teachers tell you to ‘write what you know,’ they are teaching you to scale things correctly. In other words, if you can’t draw a cup, it’s going to be hard to draw a battle station. Until you can accurately describe your own world, it’s probably going to be difficult for you to describe someone else’s.”

Knowing Mr. Díaz’s significant background and work in activism and advocacy, students posed questions about the Latino community’s response to the grand jury decision in Ferguson, about the reality of the “American Dream,” and about the role power plays in the country’s dialogue on race.

“So often, our focus in these conversations is directed to individuals,” he said. “The problem with focusing on individuals is that it often causes us to lose sight of the larger patterns. For instance, just because we elected Barack Obama as President, does that mean that the larger African-American community is doing really well? Our responsibility is to face those really challenging, personal, ingrained issues we each have and—when we see problems there—work hard to change them. Take advantage of your education to learn to see things clearly. No matter what you decide to do in life, you’re going to need that clarity, that vision.”

Mr. Díaz emphasized what he hoped would be one take-away for students: “Education only matters if it’s about transformation,” he said. “School is effective when the person who walked in those doors doesn’t recognize the person walking out years later.”

Mr. Díaz is the author of several books, including The Brief Wondrous Life of Oscar Wao, for which he earned the Pulitzer Prize for Fiction in 2008. He is a creative writing professor at M.I.T. and the fiction editor of Boston Review. A 2012 MacArthur Fellow, Mr. Díaz is also a member of the board for Freedom University. His critically acclaimed books include Drown, The Cheater’s Guide to Love, and This Is How You Lose Her.