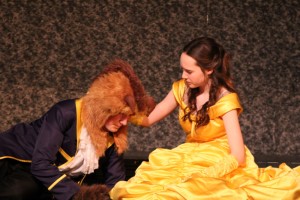 On Thursday night, and again on Friday morning, the B & B Company presented Beauty & the Beast, Jr.

The 30-member company, which began rehearsing at the start of the winter athletic season in late November, is led by collaborative coordinator, Debbie Simon who, together with musical director, Louise Mundinger, a band of Upper School student volunteers, imagined, created, and transformed Thacher into the scene of the well-known fairytale. The student directors, headed by Class I students Maddie Dupre and Sophie Charles, are all former Middle School talents who dedicated four months of after school time to work on the production. Ms. Simon has dedicated this show to Maddie and Sophie, who have given so much of themselves to Middle School theater over their four years of Upper School. A special thank you and welcome, also, to Class IV directors, Laura Bailey, Abigail Foster, Cianna O’Flaherty, and Jocelyn Sabin — your direction and choreography work have been instrumental to the success of the production.