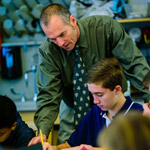 In a matter of minutes on Milton’s campus, it is possible to witness the passage of time as marked by the development of children. From a distance, we have seen the youngest members of our community strolling neatly in line behind their teachers. We have also seen our middle school boys and girls frolicking joyously through snow, mud, and puddles to and from Ware Hall, as well as the oldest students congregating in small groups wearing heavily weighted backpacks and purposeful expressions.

Over my first several years of teaching and coaching I was fortunate enough to work closely with young people from 5 to 18 years old. Without question, each age group has its own qualities that are widely appreciated, from the raw exuberance of young children to the measured swagger of older adolescents. I realized early in my career that 11-14 year olds are my resonant demographic. Although I cannot quite isolate why this is, I suppose it has something to do with my respect for the challenges middle schoolers face and their enjoyable temperaments.

If nothing else, the middle school age is an intriguing time. Who might blush uncomfortably as their voice cracks when describing the connection between a protagonist’s quote and the historical time period of a text? Who is as likely to lose three personal items in three weeks as to be able to find the point of intersection of two mathematical functions? Who might enter a soccer game after repeatedly flipping a water bottle on the team bench while singing a tune from an animated film, only to beat a defender with a double step-over move to score a goal with an off-footed knuckle shot? I love living among these contrasts!

Middle school students possess a fantastic blend of curiosity, enthusiasm, playfulness, idealism, underdeveloped inhibitions, and burgeoning skepticism, independence, and critical thinking skills. These skills are needed to relieve the almost conscious tension between reconciling the simplicity of youth and the complexity of maturity. It is so enjoyable to work with people who are willing to take risks and to continually strive to improve—people whose ultimate goal is to gain a more sophisticated and authentic view of the world. As part of this process, middle schoolers can push back on information or conventions they question. Nearly every day I have wonderous discussions that cause me to self reflect and reassess my own understandings and perspectives.

There is such potential during this time of rapid physical, emotional, and cognitive growth that is arguably only second to the growth that occurs during infancy. We have countless experiences in our personal lives and as a society that tell us there is great influence to be had during times of rapid growth. Often our influence as parents, teachers, and coaches on these young adults is revealed before our very eyes and in short order; these are truly gratifying moments. More often, however, our influences are packaged as time capsules, effecting change over a longer period of time. Although we may not benefit directly by observing the fruits of our labors, we have trust in the inevitable process.

I am inspired and energized by our middle schoolers and am so grateful to be a member of our Middle School community. I have long since stopped being surprised by the talents and fortitude of these young adults. Their skills and accomplishments in so many areas continually remind me of their seemingly limitless potential, and their cheerful and optimistic natures make for a fun and warm workplace. Every so often as I walk around our beautiful campus I find myself stepping in a few puddles and nearly breaking into a light jog as I travel the paths of my people.