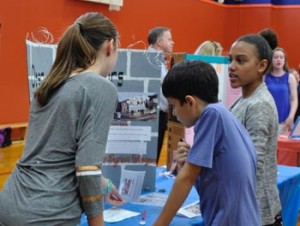 A year of research by Grade 7 students culminated in the second-annual Creative Scholars Project museum and showcase on May 17, as students presented their work on social justice issues. Topics ranged from worldwide issues such as fair trade, child labor and religious bias to more national or local issues like the gender pay gap in professional hockey and illegal immigration.

The students chose topics they feel passionate about, says Grade 7 Dean Jin Lee. “They did research, and developed a question they wanted to explore,” Jin says. “They then produced an art piece to convey their message. They also came up with an action step to work toward solving the problem or problems they found.”

Alison wanted to explore a topic that she’s had some experience with. “As a girl in seventh grade, I haven’t experienced things like a gender wage gap, but I have lived with dress codes. I wanted to research ways that different dress codes impact girls versus boys,” she says. While Milton’s dress code is fairly lenient, Alison still created a proposal she feels will make it more gender-blind. She also found schools where girls have been shamed for popular styles that administrators claimed distracted boys, or where students have been unfairly prohibited from certain ethnic or cultural styles.

Zander found inspiration for his project from an uncle who’s a public defender. He studied the cases of people who have been wrongfully convicted and imprisoned, and learned that inadequate counsel, mandatory sentencing rules and racial bias have all contributed to the problem. Zander found that wrongful convictions are a complicated issue to solve, but developed some action steps.

“I’m asking people to educate others about the issue of wrongful imprisonment and to support the national and state lawmakers who support increasing the number of public defenders, so their caseloads will be lighter and they can give cases better attention,” he says. “People can also support lawmakers who are trying to end mandatory sentences for crimes.”