Making the Impossible Possible Takes Work, But It’s Worth It, Says Chris Waddell 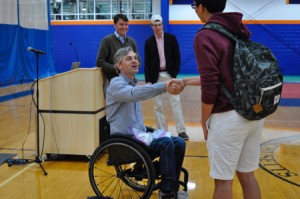 “It’s not what happens to you, it’s what you do with what happens to you,” says Chris Waddell, a 13-time Paralympic medalist and monoskiing world champion. “We create images and labels for ourselves because we’re so afraid of breaking away from the crowd, afraid of looking stupid. But if we’re so afraid of looking stupid, or of being different, we run the risk of never figuring out what’s great about us.”

Invited to Milton by the Albright family and Middle School Principal Will Crissman, Mr. Waddell spent time with Upper and Middle School students, asking them to shift their perspectives of people with disabilities and to push beyond the limits of the labels placed on them.

Mr. Waddell broke two vertebrae in a ski accident on a winter break from Middlebury College, losing the use of his legs. After two months of recovery in a hospital, he decided to return to Middlebury’s snowy, hilly campus, where he found that his relationships with his friends were unchanged; they were part of the same team. His college ski coach brought him on his first trip on a monoski, and he repeatedly fell, not making a turn all day.

“Not being able to walk was the worst thing that I could imagine happening, but it was also the most powerful thing that ever happened to me, because I had to get better,” Mr. Waddell said. “I always had to find some sort of solution to every problem.”

People with disabilities are often overlooked or considered incapable—partly because of the stigma surrounding disability, but also because people are told “not to stare” at those who are different. Recounting a conversation with a little girl who pitied him, Mr. Waddell said he wished he’d continued talking to her.

“If I had never had my accident, I would never have had the opportunity to be the best in the world at something. I was the best monoskier in the world,” he said. “What a gift to be able to do that.”

Like all elite athletes, success for Mr. Waddell came with practice and the willingness to come back after failing. “The Michael Jordans of the world struggled like anyone else, they just struggled harder and longer. When other people gave up, they kept struggling.”

Mr. Waddell retired from competitive sports with some trepidation, worrying that he didn’t know what he would be if he wasn’t a professional athlete. So he set a goal, and he became the first paraplegic person to summit Mount Kilimanjaro, the tallest peak in Africa. He made his climb unaided except for 100 feet of terrain where he was carried. He wants his climb, along with his One Revolution Foundation to improve visibility and opportunities for people with disabilities.

“I thought if I could get to the top of one of the tallest mountains in the world, then people would have to see me,” he said. “I want them to see the hundreds of millions of people living with disabilities.”

Competing as a monoskier in the Winter Paralympics, and as a track athlete in the Summer Paralympics, Mr. Waddell earned 13 medals; as a World Championship skier, he won 9 total medals. He was inducted into the U.S. Ski and Snowboard Hall of Fame and the Paralympics Hall of Fame. The Dalai Lama honored him as an “Unsung Hero of Compassion.” People Magazine named him one of the “Fifty Most Beautiful People in the World.” Skiing Magazine placed him amongst the “25 Greatest Skiers in North America”. Middlebury College presented him with a Doctorate in Humane Letters. National Public Radio (NPR) named his 2011 commencement address to Middlebury as one of “The Best Commencement Speeches, Ever.”