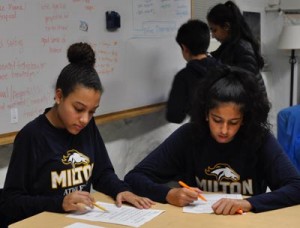 In addition to the team’s success, Milton team member Hailey was recognized as the highest-scoring sixth grader in the entire competition. The British International School of Boston won the team competition.

The math team’s 10 team members and three alternates competed individually in five 10-minute rounds—number theory, arithmetic, geometry, algebra and a surprise category—before a final, 15-minute round in which the teams collaborated to solve complex problems. The questions are difficult, Nancy said, and students should feel proud if they correctly answer one out of the three questions in the individual rounds.

“We have a rigorous math program here at Milton, but some students want more. They love math,” Nancy said of the math team. “They’re begging for even more challenging problems because they want to push themselves.”

There are five IMLEM meets overall during the school year. At the end of the year, the teams and individual student with the highest scores are recognized for their achievements.