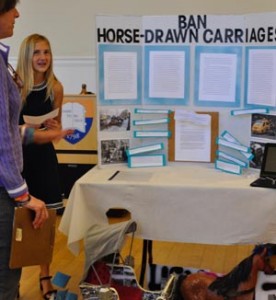 Presenting their work on topics ranging from Puerto Rican statehood to bullying, to elephant poaching to the benefits of STEM education, Grade 7 students concluded their semester-long Choosing to Participate (CTP) in a gallery open to their peers, teachers and parents.

CTP is an interdisciplinary research project overseen by Grade 7 social studies faculty member Steven Bertozzi. The theme of the project is “global citizenship.” Students chose topics about which they are passionate and curious, and spent the spring semester researching the issues, seeking expert input and identifying action steps to solve problems.

Marshall chose to research police brutality in the United States, and presented statistics about excessive-force cases, including the racial identity of victims and low rates of convictions among police officers charged in brutality cases. “If we require police to wear body cameras, I believe they will be more accountable for their actions,” Marshall said. “They should also undergo diversity training and get to know the communities they are policing.”

Sophia, inspired by her aunt’s battle with aggressive cervical cancer, decided to research the cancer’s warning signs and the importance of early detection. Working with the American Cancer Society, Sophia held a mini Relay for Life on Milton’s campus and raised more than $20,000 to donate to the ACS.“Cervical cancer impacts a lot of women every year,” she said. “My goal is to raise awareness.” 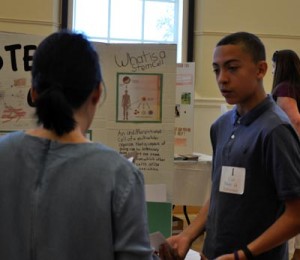 Amelia studied the impact of a baby’s stay in a neonatal intensive care unit (NICU) on families. The costs for parents of having a child in the NICU are staggering, and more often impact families of color because of unequal access to prenatal care. Amelia was born premature and spent nearly a month in the NICU—the hospital stay cost her family about $1,000 in parking fees alone.

Amelia said she urges people to volunteer in NICUs or knit hats and blankets for the babies. She also called her representatives in Congress to urge their support of long-term health insurance coverage. “If the coverage isn’t there, it can leave families drowning in debt.”