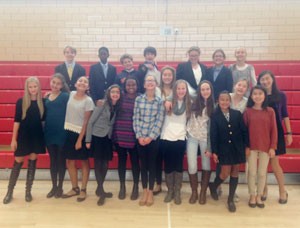 “Coaching a speech team takes more than a village,” says Ms. Simon. “We are a collaborative group who work together to cultivate a team of young people passionate about speech. Our coaches inspire the young speakers and help them learn to stand up in front of an audience and find their voice.”

Earlier this month, the National Speech and Debate Association (NSDA) asked Ms. Simon if she—with students and coaches—would participate in a webinar, sharing with other NSDA members around the country the success of this unique coaching program. Ms. Simon gathered the group, and they filmed the webinar from her English classroom in Ware Hall.

“Mack was such an amazing coach for me; he really helped me in every way,” says Michael in the webinar. “He helped my Duo Interpretation partner and I with eye contact and how to portray certain characters. He also helped my partner and I with bonding, which is an important feature for a Duo event.”

“I had a really great Upper School coach when I was on the Middle School team,” says Mack. “He was so important in my speech career, because he taught me the artistry of speech, and he helped me develop and practice these skills.”

“When Adrian started in Impromptu last year, he was brand new to it, but it gave me an opportunity to teach someone how it works and how to formulate a speech. That naturally… helped me develop my own talents in my category of Extemporary. It was really a two-way relationship. It was a rewarding experience and I wouldn’t give that up for anything.”

Adrian, now in the Upper School, is coaching his own Middle School student. “Being an Upper School coach is very valuable—it allows me to continue my own growth but also share the gifts that Marshall gave me with someone from the Middle School and help them to grow,” says Adrian.

“I’ve had two amazing Upper School coaches,” says Isabel. “They’ve pushed me forward and helped me prepare for nationals. They take time out of their busy schedules to meet with you and show you what to do. They help you progress from the beginning of the year to the very end, and it’s such a dramatic change. They dedicate their time to us so we can have our best shot.”