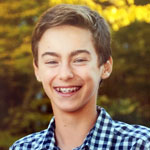 On my first trip to Guatemala, my family and I installed water filters and stoves in many houses. Many families in Guatemala can’t afford a stove, so they have to cook indoors on an open flame, causing pollution in the home, with smoke and high levels of carbon monoxide and posing a burn danger to small children. Open-flame cooking has caused an increase in the rate of respiratory diseases in Guatemala, especially in children. The stoves that we installed are called ONIL stoves. It only takes about 30 minutes to install one in a house, and they reduce harmful emissions while keeping the flame contained.

I was introduced to Guatemala by my dad, who has been going there every year since 2000 to do surgeries to repair cleft lips and cleft palates on children. Without visiting surgical teams, the indigenous Mayan population has absolutely no way to afford these operations. My dad’s team performs 50-60 of these surgeries each trip.

Guatemala is an extremely poor country. The average annual income is $2,740, just 5 percent of America’s average. The literacy rate is 75 percent, the second lowest in the Western Hemisphere. Sixty percent of the population lives under the poverty line (the 16th worst in the world), and the average life expectancy is only 71 years, the 55th worst in the world. Guatemala’s income gap is huge. The poor are almost entirely made up of the indigenous Mayan population, and the rich are almost all from Spain or have some Spanish heritage. The inequality is connected to a lot of violence and corruption in Guatemala.

The high need for support in Guatemala is one reason my dad started helping people there and I got to go with him two years in a row. The following year we weren’t able to go because it was the year of my Bar Mitzvah. Traditionally, the person who is going to become either a Bar or Bat Mitzvah does a Mitzvah project in the months leading up to the day of their ceremony. I decided that I wanted to focus on helping educate underprivileged children in Guatemala. I realize that I am incredibly fortunate to have access to the education I am receiving. I believe that it is a right of every child to obtain an adequate education, although it is not a reality for much of the indigenous population of Guatemala.

I decided to work with an organization called Hug it Forward. This organization builds “bottle schools.” A bottle school is a school made from eco-bricks, water bottles stuffed with non-recyclable waste. By using this method to build a school, the community not only works toward providing its children with an education, but also removes waste from the environment.  This organization is very successful, having built 109 schools in about 8 years. I chose this charity because of its innovative thinking and connection to a place that is special to me and my family. We will be going to Guatemala this March to help with the construction of a bottle school.

Many Guatemalan children have to walk miles to and from school each day, taking up precious time that they could be sleeping, studying, or just playing with friends. Having schools closer to their homes will give them time to just be kids.

Students who receive a good education have the ability to make choices with what they do when they grow older. The lack of a proper education is limiting. The world has to invest in youth education in impoverished countries to create a better future.

If anybody in the Milton community wants to get involved there are several charities working in Guatemala, including Mayan Families, Solomon’s Porch, Medical Missions for Children, and Hug it Forward. At Milton, we have so many resources and opportunities. Instead of taking what we have for granted, we should take advantage of it, and use it to its full potential.