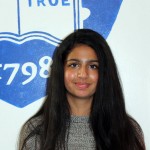 I was at Ashray, an HIV orphanage in Mumbai for preschool to middle school-age children. Every child there either had HIV or a parent with HIV who was incapable of taking care of their children. I had visited India many times before, and I was well aware that being poor means something very different there than it does here, but visiting Ashray gave me an entirely different perspective. I spent time with the smaller children, drawing pictures and talking to them. They wanted me to draw cake, chocolate and houses. With smiles plastered to their faces, they asked me what ice cream looks like. Watching the joy they found in playing games and folding paper made it tangible. I no longer had a jumble of facts and statistics at the periphery of my brain, but instead a deeper awareness of the situation. Places like Ashray provide a haven, but the question of what happens to children who have no haven left me troubled.

In seventh grade at Milton, I had done my Creative Scholars Project on girls at risk in India. The facts I gathered while researching my CSP heavily affected me. I discovered that girls are one of the largest and most at-risk groups of people in India. They are seen as burdens on their families, while boys are seen as profitable due to the dowry practice and a patriarchal society. Girls suffer from various injustices like infanticide, sex-selective abortion, trafficking, neglect, and exploitation every day. These forms of cruelty can be grouped together to form the term “gendercide.” The reality of gendercide is that one in four girls in India do not live past puberty; 50 million females are missing from India’s population due to gendercide; and approximately one girl a minute is aborted, all for the crime of being female.

After doing my CSP and visiting Ashray, I was motivated to not let the initial impact drop. I wanted to continue taking up this issue at Milton, and provide an accessible opportunity to aid these girls directly. In my CSP, I had found an organization called the Invisible Girl Project (IGP). IGP partners with Indian organizations that rescue gendercide victims and provide care and support. One way to help IGP’s cause is to write letters to the rescued girls. These girls have withstood great challenges, and to receive kind letters from others lets them know that they are loved and supported. Having people at Milton write letters to them was the exact opportunity that I had been looking for. It is an easy, direct way to do something kind for these girls. The Milton Academy community exemplifies kindness and compassion, so I was not surprised when I received a great response. I hope that many more will spare some time to write something encouraging.

Sitting down to write my letters, I think about the things I learned in my CSP, about the girls rescued by the IGP, the trauma they have suffered, and I wonder what to say. However, then I remember the girl in the tattered princess dress at Ashray. I think of the beaming faces of the preschoolers, and how the smallest things bring joy to them. I feel then that I know exactly what to say, and I start by drawing a large cake on the top.