Students Bring a ‘World of Pure Imagination’ to Life in Wonka 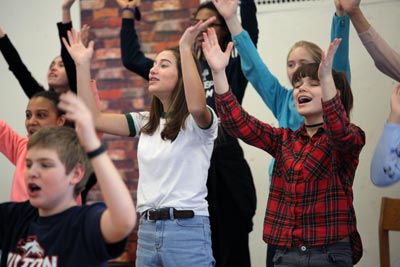 Thacher Auditorium will transform into a color-filled candy factory next weekend, as Middle School students perform Roald Dahl’s Willy Wonka Jr., the beloved story of a wacky candy-man and his contest to audition potential heirs to his operation.

Student tech crews are working to create larger-than-life cupcakes, gum drops and lollipops to brighten the stage. “In terms of the set, with all the props and everything, I think this is the biggest production that we’ve done,” says Thea (Grade 8), who is doing sound tech for the show. Eighth-grader Sophia is the stage manager, and Upper School students Jocelyn Sabin (III) and Ashley Hales (IV) are assisting with the production throughout the rehearsals.

Every performer in the cast of 27 is important to the show, says Sofi (Grade 8), who plays the mother of Charlie Bucket, the poor boy who wins the fifth “golden ticket” to visit the Wonka factory. “The best part has been getting to know everyone else and making friends,” Sofi says. “Even if you don’t have the biggest part, you have an important role, and it builds your work ethic. It’s a really fun experience. Even students who aren’t necessarily into musicals can have a good time.”

Karol (Grade 7), who plays one of the mischievous Oompa-Loompas working in the factory, said the cast’s teamwork will be on display in the production. “It’s a really magical show and I think we make a good team,” she says. “This place is going to come alive.”