Using Robotics As A Gateway To The World, Milton Student Educates Peers 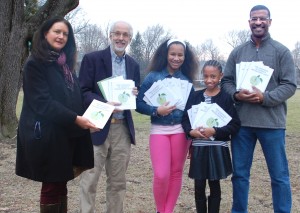 Milton eighth-grader Katheryn Prather (assisted by her dad, Darcy), teaches students at a math and science summer enrichment program in Jamaica Plain, Massachusetts, where her one-week robotics course has sparked a connection halfway across the world with Indian science teacher and author, Lakshya Kaura.

Each summer, the Bethel Math and Science Scholars Summer Program (BMSSSP), includes topics such as science, engineering, mathematics and technology. Last summer, the Prather family, whose children both began at Milton in Kindergarten, suggested that one of the weeks have a robotics theme. Their recommendation was based on their daughters’ enjoyment of Milton’s fifth-grade curriculum, and their belief that robotics is a hands-on way of engaging students in science, math, problem-solving and engineering.

Katheryn took the lead, reaching out to science teacher Gary Shrager to borrow robots. Mr. Shrager not only offered robots, but he also provided ideas and materials for extended challenges. Professor Radhika Nagpal of Harvard also opened her robotics laboratory to the BMSSP students. Charlene Greene, BMSSSP academic program director, was thrilled to see students “incorporating information they learned earlier in the week in order to create their own challenges.” Gary adds, “That next step in learning is what we all strive for.”

The Saturday Course at Milton Academy, a flagship program for Milton Academy’s commitment to authentic engagement between public and independent schools, has committed to extending its work to connect the students at BMSSSP with Lakshya Kaura. Last fall, the Saturday Course partnered with Mr. Kaura in India to bring his book, Learning of Science Begins with Why? to life and into the classroom. Born in 1999, Mr. Kaura is a science teacher in Ballabgarh, Haryana, India. He was recognized as one of the top-10 innovators across Australia and Asia by Google Science Fair in 2013, holds two patents granted by the Australian Patent Office and has been honored as a National Innovator by two presidents of India. Through Milton Academy, Mr. Kaura is providing 50 copies of his book, Learning of Science Begins with Why? to the students of BMSSP.

“I am blessed to have had education in my life, and feel even more so when I get an opportunity to share it with others,” Mr. Kaura says. “I enjoy facilitating access to learning and hope to continue doing it, globally.”

The book includes science experiments that work well because of their accessibility and inclusion of inexpensive, everyday objects. The goal is to bring a fun approach to hands-on science learning, while also developing skills. This year, Saturday Course students have experimented, analyzed, and shared the results with their peers from Mr. Kaura’s school. With thousands of miles between the classrooms, the experiments are the same—but will the conclusions be as well? This summer, students in the Bethel Math and Science Summer Scholars Program will have the same opportunities to experiment and share.