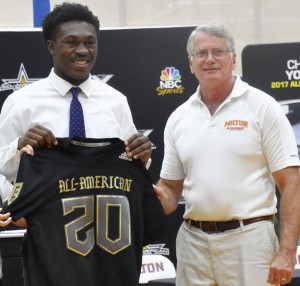 Milton’s varsity football linebacker and running back, Kalel Mullings (I), has been selected for the 2020 All-American Bowl, joining an elite group of athletes who have played in the all-star game. Surrounded by his coaches, teammates, family and friends, Kalel was presented with an honorary game jersey, commemorating his selection, during a ceremony in the FCC on Tuesday.

Kalel began his varsity football career as a 13-year-old freshman, playing against 18- and 19-year-olds in one of the top leagues in New England. He will attend and play at the University of Michigan next year.

“One would surmise that all this attention and notoriety would affect Kalel,” said Coach Kevin MacDonald. “However, he has never changed. He has continued to be the same kind, affable, humble and outgoing young man he has always been. Yes, Kalel is an outstanding football player with a bright future, but he is an even better young man who has left an indelible mark on our school.”

Past All-American Bowl participants include NFL players Reggie Bush, Tim Tebow, Joe Thomas, Andrew Luck, Odell Beckham Jr. and Trevor Lawrence. The honor recognizes top high school football players as they pursue their goals on the field, and provides opportunities for competition, learning and personal development that benefit student-athletes both on and off the field.

Kalel is the only Massachusetts athlete selected to play in the 2020 All-American Bowl, which takes place on Saturday, January 4, 2020, in San Antonio, Texas. It will air live on NBC.

Boston City Council Member Matt O’Malley, who represents Kalel’s West Roxbury neighborhood, presented him with a Certificate of Recognition from Boston Mayor Martin Walsh and a resolution for the City Council to acknowledge his achievements.