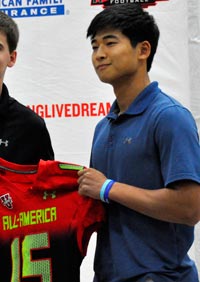 Milton’s varsity football kicker, Justin Yoon (I), has been selected for the 2015 Under Armour All-America High School Football Game. Surrounded by his coaches, teammates, dorm brothers and friends, Justin was presented with an honorary game jersey, commemorating his selection, during a ceremony in the ACC on Monday.

Justin joins an elite company of football talent—including NFL players A.J. Green, Julio Jones, Trent Richardson, Stephon Gilmore, Da’Quan Bowers and Janoris Jenkins—who played in past All-America games. The honor recognizes top high school football players as they pursue their goals on the field, and provides opportunities for competition, learning and personal development that benefit student-athletes both on and off the field.

The Under Armour All-America Game takes place on Friday, January 2, at Tropicana Field in St. Petersburg, Florida. It will be televised on ESPN2.