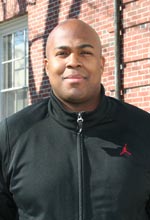 Lamar Reddicks, who joined the faculty in 2008, will be Milton’s next director of athletics and physical education in the Upper School. Lamar has been the assistant athletic director and head coach of the boys’ varsity basketball team, and his roots in the town of Milton run deep. A member of Milton High School’s 1996 state championship basketball team, Lamar was inducted into Milton High School’s Athletic Hall of Fame in 2007. After captaining the men’s basketball team at Bentley College, Lamar spent eight years coaching at the collegiate level, working with Harvard’s and Boston University’s men’s teams.

Aware of the power of good coaching on students’ growth as athletes and individuals, Lamar motivates young people and the adults who work with them. As an advisor, teacher, and coach, he sets high expectations, builds students’ confidence, and instills the value of good character, all essential for excellence in interscholastic athletics and physical education. With an appreciation for Milton Academy’s culture, Lamar also encourages students as scholars and artists, exhorting them to contribute to the broader community.

Since Lamar was in college, he has directed basketball clinics for young children. Students in grades three through eight work with coaches to sharpen their basketball skills and build their confidence. In recent years, his Milton players have helped him run the clinics: “They do a wonderful job working with the younger students,” says Lamar, “and they gain a lot from the experience—just as the younger students gain from those who are older. I’ve always been a believer in mentoring and the importance of the mentoring relationship. Here, both the older and younger students are reaping the benefits.” The mentoring relationship, he says, sets both the young players and their coaches up for success, on and off the court.

“People view success in many ways; I view it as helping young athletes reach their potential, and that potential is different for everyone. The best part about coaching at the high school level is that the students are still developing their interests, skills and talents. I enjoy helping students during the development process—I believe that’s the most important job that a coach has.”