Leaders of the Pack: Henry Russell (II) and the Boys’ Cross Country Team Have Much to Celebrate This Season 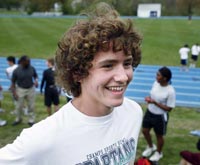 When Henry Russell (II) finished his first season on Milton’s cross country team two years ago, he couldn’t imagine a season that would top it. This year he co-captained, with Dylan Watson (I), a team that exceeded his high expectations: Milton’s varsity boys’ cross country team placed third in the Independent School League and then went on to finish third in the New England Championship race. Competing on the 5K course, Henry placed first in New England with a time of 18:05. One week before, competing in the ISL race, he set a personal record of 16:29.

From a family of athletes, Henry has been into running for a long time. “It’s an honest sport,” he says. “While other sports have tryouts, and sometimes ability is subjective, in running if you’re the fastest, you’re the fastest. Sprinting is often more about natural talent, but long distance running is about grit—a person’s desire and commitment to put in the work. The Blue Hills, where we run, are beautiful. The more time you spend out there pounding the hills the better you get, and in the meantime you’re taking in all the nature around you. It’s a win-win.”

Henry doesn’t rely on music to motivate him through a run: “The rhythm of the breathing and feet sets up a better beat for me than any music would,” he says. That’s not to say music doesn’t play an important role for the team. The boys’ cross country team is notorious for their Friday afternoon practice runs, where they push a shopping cart with a boom box inside, blaring motivational tunes. On those days, every runner is keeping pace with a smile on his face.

“The things you think about or feel on a 90 minute run—or the things that will come up in conversation running with a teammate—wouldn’t naturally come up in another situation,” Henry says. “I think that’s what makes us a tightly knit group.” Students on other athletic teams often ask the boys, “When we get in trouble we have to run, so what do you have to do when you’re in trouble?” The standard response from the team is a broad smile followed by, “We don’t get in trouble.”

Though the team’s camaraderie makes it look like fun and games, the boys depend on their teammates and coaches to help them push through when slowing down seems an easier option. “When I’m training I might think about friends or life, or visualize a finish line,” Henry says, “but in a race I sometimes get negative. When you’re running you can’t think about how much it hurts—that will kill you. The mental element of running is huge; it will make or break a run.

“The upperclassmen my first year were great leaders, and this year we had to be those leaders. It’s cool knowing that we did become those leaders, and we had a really great season because of it. The guys on the team are an amazing, funny, quirky bunch of guys, and we have a blast together. Our coaches—“Bos” [Scott Bosworth] and Kevin Murphy—really keep our spirits up, even when we’re hurting, they keep things light and positive, and we owe a lot to them.”