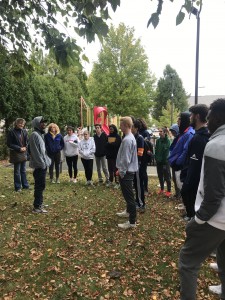 Poor air quality, asbestos dumping, and lack of green spaces are just a few of the environmental issues that residents in lower-income city neighborhoods face on a daily basis. Twenty-two students from the Activism for Justice in a Digital World class and two sections of Science in the Modern Age went on the Toxic Tour of Dudley Square in the Boston neighborhood of Roxbury to learn about environmental justice initiatives.

David Nolies, from Alternatives for Community and Environment (ACE), a nonprofit based in the square, was their guide. “We are the voice for the people that don’t have a voice,” he told students. David grew up nearby in a government housing project and has been involved with ACE for 22 years, since he was 15 years old.

As he walked students around to different spots, he explained how Roxbury’s childhood asthma hospitalization rate is nearly six times higher than the state average; how developers would raze buildings and leave behind toxic debris; and how the neighborhood train to downtown Boston was replaced by an inefficient and polluting bus system, making access to jobs more difficult.

History faculty member Andrea Geyling-Moore started bringing students on the tours around 10 years ago when former Milton student, Dave Jenkins ’99, worked as an organizer for ACE. Dave video-conferenced with students the day before the tour and talked about how one of the group’s big successes was an eight-year battle to get the subway system to offer discounted youth passes. Although he no longer works at ACE, Dave continues to work on environmental justice issues.

Back at ACE’s offices, students had lunch and wrote their reflections of the morning. David Nolies talked more about how important it is for young people to be engaged in environmental justice. On the way back to Milton, students made a quick visit to the Urban Farming Institute in the Mattapan neighborhood of Boston. Some Milton students are regular community engagement volunteers on the farm.