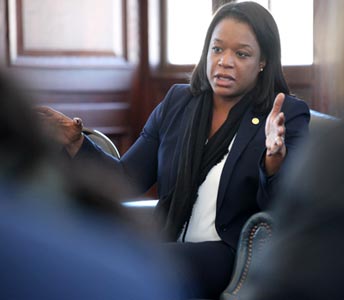 The differences we bring to the institutions we belong to strengthen those institutions and our relationships within them, says Dr. Kedra Ishop, the vice provost for enrollment management at the University of Michigan-Ann Arbor.

“It matters who you engage with and how you engage with them,” Dr. Ishop told students. “You all learn better, and you learn from each other, when you’re not all the same.”

Dr. Ishop received her undergraduate and graduate degrees from the University of Texas-Austin, and later worked in admissions there. UT—like Michigan and other highly selective universities—has been the subject of challenges to its admissions practices regarding race and ethnicity.

Dr. Ishop described Sweatt v. Painter, a 1946 Texas case brought by Heman Sweatt, who was rejected from the UT School of Law because he was black. There were no law schools in Texas that would accept black students, and initial rulings ordered the state to form schools specifically to accommodate Sweatt, the first of which failed before enrolling a single student.

Several years before the landmark Supreme Court case Brown v. Board of Education reversed the Plessy notion of “separate but equal” and began the integration of public schools nationally, the final ruling in Sweatt determined that UT could not keep an otherwise qualified student from enrolling on the basis of his race.

A major shift has occurred in admissions processes since Sweatt, Dr. Ishop said: Policies are no longer made to keep certain students out, but rather are holistic approaches geared toward including students with a wide array of identities. Modern legal challenges to admissions policies, such as Grutter v. Bollinger—in which a student claimed she was rejected from Michigan for being white—have failed because the Supreme Court ruled in Grutter that there is an educational benefit to diversity. A 2008 lawsuit, Fisher v. University of Texas, is ongoing: two white students have challenged UT’s admission policy because, they claim, they were unfairly rejected based on race. UT has prevailed in every stage of the case so far.

Schools can and do evaluate prospective students on more than just test scores and grades, through interviews, application questions and personal essays, Dr. Ishop said.

“Our admission practices are about inclusion, they’re about having representation, about being able to be counted in the process, being able to be identified in the process,” she said. “There are those we encounter in the admissions world who argue that the use of race and ethnicity in the process is the very antithesis of what Dr. King stood for. We all know his words, ‘I have a dream that my four little children will one day… not be judged by the color of their skin, but by the content of their character.’

“I don’t have a lot of patience for that argument, because it comes from the wrong perspective. During Dr. King’s era, race and ethnicity was used to oppress. It was used to keep people out. To keep people out of this bathroom, or from sitting at that counter, from sitting on the bus, or from certain schools and public places. We believe, in higher education, that race and ethnicity and the many identities students are bringing to the table should all count, for everyone. They should not be used in a discriminatory way, but who you are matters. The color of your skin matters, your economic background matters, your sexual identity matters, your political affiliation matters, and we should do our work to try to craft the diverse environments we are seeking. We are no longer using these things to keep people out, but to bring them in.”