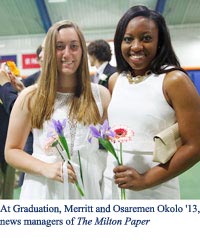 Merritt Levitan ’13 was an accomplished, self-aware, highly motivated young woman, well known by adults and students across the Milton campus because of her diverse passions and commitments. In describing Merritt, those who knew her highlight her bravery, her kindness toward others, her maturity and resilience, and her inherent leadership qualities.

“Merritt was simply a wonderful person,” says Todd Bland, head of school, “intellectually impressive, generous and thoughtful, to name just three of many endearing characteristics. Merritt was amazingly gracious, when offering a favor to a friend, a classmate, or a head of school. She would ask with complete sincerity, ‘Would it be okay with you if I give you this gift?’ That was Merritt.”

Planning a cross-country bicycle trip was only the most recent example of the energy and focus with which Merritt lived and relished life. She had a passion for being outdoors, says Kendall Chun, faculty advisor to the Outdoor Program. “During winters, Merritt was on the ski slopes racing and teaching young skiers; in the warmer months she was with the Outdoor Program, hiking, kayaking and canoeing. Merritt joined the Outdoor Program her freshman year and became a familiar face on trips at Milton. As a senior, she became one of the three heads of the program and helped introduce new students to the outdoors. Merritt carried herself with a sense of purpose and direction.” Merritt was committed to helping younger students beyond the Milton campus, as well. She was a dedicated volunteer at the Taylor Elementary School in Mattapan, where the children looked forward to her weekly presence.

Merritt was an avid interscholastic varsity athlete. She was a four-year varsity ski team and girls’ tennis team member. “She served as tennis captain this past season in an ISL championship year,” says her coach, Troy Crichlow. “She was always there for teammates going through bad times, on and off the court. She made their problems hers because she cared for each of them so much. She was selfless. Although she was injured this year, she came to every match and every practice to support the team. Merritt made me a better coach and person through the years.”

Merritt’s role on the editorial board of The Milton Paper called on the attributes that were evident in her athletic endeavors, along with the ability to listen, analyze and write. A news manager, she balanced a journalist’s eagerness to find and report an “inside story” of an issue with careful consideration of the complexities involved. Getting “the scoop” is one thing; weighing responsibilities and evaluating the outcomes of what you might publish is another. “I think of Merritt as this incredibly steady presence amidst a group of expressive, opinionated buddies,” says Lisa Baker, faculty advisor to The Milton Paper. “She had an understated, gentle way about her, an equanimity. She laughed easily too—she had a great, dry sense of humor.” Merritt and her Paper colleagues showed restraint and maturity over the year, navigating students’ and adults’ expectations successfully.

Merritt excelled in the classroom. Nicole Colson, Merritt’s teacher in Modern Comparative Literature, describes her as a “serious student who brought wonderful ideas to the classroom.” An advanced Spanish student, Merritt this year chose a Don Quixote course taught by Victor Llacuna, who was also her faculty advisor. “She had a special instinct to analyze, a talent in finding the core of the message from any complex text,” Mr. Llacuna says. “Merritt participated in the Spanish Exchange with Colegio El Pilar in Madrid; she was key in making that experience successful for everyone.”

Another of Merritt’s passions was art. A talented 3-D artist, she took Advanced Independent 3-D art as a senior. One of her art teachers, Maggie Stark, noted that “Merritt was intrepid in her willingness to take chances on seemingly impossible tasks, which allowed her to create original and exacting work.”

Rod Skinner, director of college counseling, is among many others who note Merritt’s independence and judgment. She invested deeply in many projects, both personal and public. Whether or not her plans came to fruition, Merritt was always able to step back, reflect, and move forward. Merritt’s astute and playful sense of humor was always near at hand, and her quiet, humble sense of self inspired everyone.

David Ball, Upper School principal says, “A generous friend and a giving mentor, Merritt forged deep connections, her kindness and loyalty enriching those around her. Energetic in the pursuit of her passions, Merritt embraced the Milton Academy community wholeheartedly, giving of herself without hesitation. Merritt’s presence enriched us all; her legacy of strength and generosity will endure.”

Click here to read the obituary for Lee Merritt Levitan.