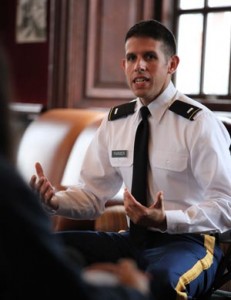 Nearly 10 years after graduation, Lieutenant Ben Pariser returned to Milton as an officer in the United States Army and this year’s Veterans’ Day Speaker. “The key traits and characteristics of service members are instilled in you at Milton,” Ben told students. “Those are adaptability, leadership and the ability to ‘dare to be true.’”

Ben recounted his land navigation training at officer candidate school, which took him through dark, swampy, dense terrain in high heat and humidity. He recalls wasting nearly an hour of limited time searching for the first target before realizing that moving on was a better strategy. He compared this to working on his first Ancient Civilization research paper at Milton, when he wasted weeks adamantly researching a dead-end topic, until he finally listened to history teacher Sally Dey’s advice that he needed another plan.

“At Milton, you learn to adapt without losing site of the ultimate goal,” Ben said. “Each of you adapt to new teachers, classes and situations. The challenge is to adapt to an unknown obstacle. Don’t be afraid to pull out your map and reroute your entire life.”

Ben nodded to the many opportunities that Milton students have to lead, as well.

“Maybe you are a co-captain of a sports team, or a club officer. But even when you are in a position where you are not in charge, you can display leadership—leading by offering help and support, and leading by example. You lead your teachers, too. I am certain that every faculty member in this room has reassessed a way of thinking, or a way of teaching a topic, influenced by the perspective of a student in class.”

Ben graduated from Brandeis University in 2010, before earning his commission as a Second Lieutenant in the United States Army Reserve. He told students how his family was “100 percent” against him going into the military, even though it was something he felt called to do since his time at Milton. Six months before his college graduation, he decided not to enlist.

“I was suppressing who I wanted to be,” says Ben. “I knew who I was and what I wanted for my life, and I ultimately found the personal courage to be true to myself. You have to respect others, but you also have to respect yourself, your dreams and your ambitions.”

Today, his family—who were in the audience in the Fitzgibbons Convocation Center—are 100 percent behind him and his military career. From 2011 to 2013, Ben served with the 443rd Civil Affairs Battalion as a battalion human resources officer and a civil affairs team chief. In 2013, he was assigned to the Headquarters, United States Army Civil Affairs and Psychological Operations Command, where he served as a readiness officer on active duty. In October 2014, Ben voluntarily deployed to Afghanistan in support of Operations Enduring Freedom and Freedom’s Sentinel, where he served as an operations officer in support of United States Forces-Afghanistan and the North Atlantic Treaty Organization’s Train, Advise and Assist Mission.