Lessons in Service and Leadership from Army Captain Nick Morton ’02 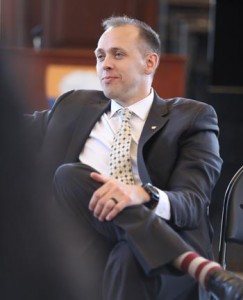 Nick Morton ’02 was a few weeks into his senior year at Milton when the terrorist attacks on September 11, 2001, stirred in him the need to serve. Before graduating from high school, he enlisted in the U.S. Army Reserve—and began a lifelong military career.

Now an Army Captain, Nick was the 2019 Veterans Day speaker.

“We spent the days and months trying to process what had happened” after the terrorist attacks in 2001, he said. “I can’t speak to what my classmates felt at that time, but for me, it began to synthesize this sense that I wanted to become part of something bigger than myself. I started wondering if I had something to give, if I could be of value.”

A self-described “wild kid with a healthy disrespect for authority” during his time living in Wolcott House, Nick had some trepidation about entering the service. In a self-deprecating address, he explained that his decision to join the military surprised people who knew him. He began his speech reading from a report card in which a history teacher wrote, “Nick was barely able to function in this class.” The concerns of his parents, teachers, and friends galvanized him to join; as a student, Nick hadn’t taken the opportunity to stand up as a leader—this was a chance to test himself.

“You have to be true to yourself. Sometimes in the face of opposition, or in the face of doubt, it’s difficult,” he said. “It’s not a sure bet, so you’ve got to dare.”

In the second semester of his first year at college, Nick was deployed to Iraq. His first experience at war was transformative, and new leadership skills emerged. “I turned 21 in Iraq, and was promoted to sergeant shortly after.”

As a Soldier, Nick has served as a weapons troop commander, infantry company commander, air operations officer, platoon leader, and civil affairs sergeant, with deployments to Iraq and Afghanistan. His military education includes graduation from the Army Ranger School, where he finished in the top 15 percent of students who completed all phases of the grueling program on the first attempt.

Nick received his bachelor’s degree in finance from the University of Maryland at College Park, and his M.S. in organizational leadership from Columbus State University. He is currently working toward his master’s degree in public administration from the Harvard Kennedy School.