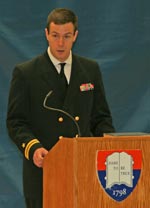 Each November, Milton students hear from alumni for whom military service has personal meaning. Students learn first-hand about experiences of graduates who have faced challenging circumstances in defending our country. On November 11, Lieutenant J. Peter Akins ’97 returned to campus to speak with students in Classes IV through I as part of the School’s annual Veterans’ Day commemoration ceremony.

Ultimately, Peter implored students to find a purpose, an area of the world that would benefit from their strengths and talents; to forge meaningful relationships with those around them; to work with others toward a greater goal, making life better for others. After his speech he welcomed questions from the audience citing that he’s “never known Milton students to be shy.” The students in the stands didn’t disappoint, and Peter answered insightful and often difficult questions about his specific work, his choices and the war itself. Peter left the podium at the end of the period to a standing ovation from students, faculty and staff.

After graduating from Milton, Peter attended Harvard, where he concentrated in history; after graduating he taught at the Sedbergh School in England. Upon his return to the States, Peter worked as a financial market analyst before enlisting in the United States Navy. Peter is involved in naval intelligence with an expertise in Iraq, from which he returned this fall after a year of duty as Intelligence Watch Chief and Briefer to the Commanding General. Sarah Wehle, Upper School principal, introduced Peter saying, “He is charged with distilling information from disparate and numerous reports into a useful brief. His knowledge and understanding of our [country’s] operations in Iraq are of unusual depth.”

For students, Peter honored and named many Milton graduates from previous generations who dedicated themselves to military service. He asserted the importance of teamwork, of joining together with others of similar purpose for a good that is greater than that achieved alone. He told students that this esprit de corps is essential in the armed forces, but also cited Milton experiences that proved his point, especially as a linesman during his Class I year (fall 1996) on the division-champion varsity football team.