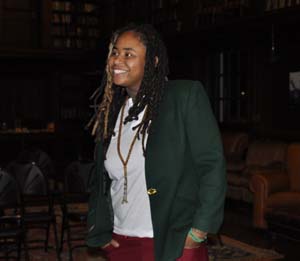 “The most effective way to do good work is when the work you’re doing speaks to the things you love,” Jeannine Kayembe told students on Thursday. Artist and executive director of Philadelphia Urban Creators, Ms. Kayembe was the first speaker in this year’s new Dream Series—a set of community conversations, hosted by the Office of Multiculturalism and Community Development. She encouraged young people to follow their own passions—as she did—to create important social change, and leave a lasting mark.

Ms. Kayembe was a teenager in 2010 when she and her friends started Urban Creators, an organization that helps transform neglected inner-city areas into safe and dynamic spaces. The group spent a year clearing a blighted, two-acre parcel in North Philadelphia of trash, pollutants and drug paraphernalia. Inspired by post-Katrina revitalization efforts in New Orleans, Ms. Kayembe described the early stages of the program as a “hustle” for funding and materials to build an urban farm.

Since that time, the program has received national acclaim and attention from celebrities like Magic Johnson and Queen Latifah. The farm has brought in nearly half a million dollars to fight food insecurity; it also offers work opportunities to at-risk neighbors and supports occupational training and violence prevention programs. In July, the group launched the cultural festival HoodStock, drawing an audience of thousands. Ms. Kayembe explained that the violent crime rate has plummeted in the neighborhood since the program began. “There are people who are still alive today because we decided to play in the dirt,” she said.

During the conversation in Straus Library, students shared their own ideas for lasting social change—improving health-care access for children in Hong Kong, expanding resources for LGBT youth in cities across the United States, and improving outcomes for people after incarceration. Ms. Kayembe urged them to explore their networks for resources, such as internships and grant funding, in order to bring their ideas to life.

Ms. Kayembe, a spoken-word poet, shared two pieces of her work before diving into the story of Urban Creators. The Dream Series conversations are a chance for Milton students to broaden their definitions of success, with a diverse group of individuals who have built meaningful lives in innovative and unconventional ways. The series continues this fall with Karo Mecho on October 13 and Sanaa “Ladydork” Jaman on November 17. All members of the Milton community are invited to attend.