Live From Afghanistan: A Lesson in Leadership for Veterans Day 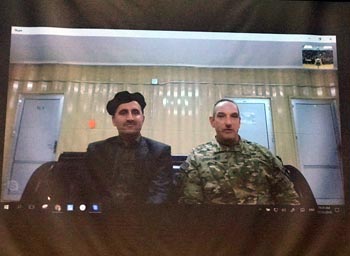 Students who listen to others, instead of fighting to command the spotlight, are building critical leadership skills—sometimes without knowing it—Army Brigadier General Richard F. Johnson P’19 told Milton students during the Veterans Day assembly.

“When I was your age, I didn’t realize that I had the potential to lead; I didn’t really understand how to model leadership,” Brig. Gen. Johnson said. “If you want to be a leader, you can do that by being a good follower: being a strong leader at times and a team member at others. Generally, the leader listens. They allow other people to express their opinions, they absorb those opinions, and that allows them to form their own.”

Serving others through leadership, in any capacity—whether as a civilian or in the military—is an excellent way to honor veterans, Brig. Gen. Johnson told students. One hundred years after the armistice that ended World War I, the “war to end all wars,” generations of American veterans have protected the United States and its allies.

Brig. Gen. Johnson is the deputy commanding general of the 101st Airborne Division. He is the Task Force Southeast commanding general in Afghanistan in support of Operation Freedom Sentinel, and the father of two Class I students. He is on his fifth combat deployment.

He addressed Upper and Middle School students via Skype from Gardez, Afghanistan, alongside Shamim Khan Katawazai, the governor of Paktia Province. Governor Katawazai is a partner in moving toward peace in Afghanistan, and his service to his country comes at significant personal risk as the Afghan government and international security forces clash with violent extremists.

Brig. Gen. Johnson and Gov. Katawazai first met over the phone as Brig. Gen. Johnson faced a violent crisis in Zurmat, upon arriving in Afghanistan. Through conversation, the general learned of Gov. Katawazai’s passion for progress on economic development, education and youth services. They built up a mutual trust and understanding about the importance of stable governance, even in the midst of military action.

Afghanistan has been at war for more than 40 years, fighting with the former Soviet Union, Pakistan and Iran. Over the past several decades, Taliban insurgents have gained and lost control of the Afghan government, at one point controlling most of the country under a violent interpretation of Islamic law.

One of the most devastating effects of Taliban rule was the dismantling of Afghan schools, Gov. Katawazai said, through a translator. The only schools remaining were strictly religious, and girls were barred from receiving any education, compounding problems of illiteracy, poverty and violence across the country, and leaving boys vulnerable to recruitment by the Taliban.

“With the aid of the United States, we have been able to establish schools, build up health services and work on infrastructure. We have democratic elections,” he said. “We are on the right track to establish a working democracy. On behalf of the youth of Afghanistan, we are grateful.”

Following the assembly, the entire School community gathered in silence in front of the Apthorp Chapel for the annual Veterans Day Flagpole Ceremony.