Living What She Teaches: Faculty Member Performs on the Boston Stage 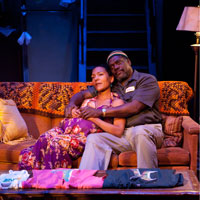 Patrice Jean-Baptiste—performing arts faculty member—is performing this month in a production of Broke-ology, presented by the Lyric Stage Company of Boston. Set in Kansas City, Broke-ology is the story of a loving, working-class African-American family and the struggles they face over three decades. A recent Boston Globe review states that the “production of Nathan Louis Jackson’s unabashedly sentimental play hits home.”

Patrice plays Sonia, the wife of William, who has big dreams for her two young sons and moving upward in life. Patrice claims a strong connection with her character: “She’s amazing. She is the universal woman who holds it down at home. She sticks with her husband through joblessness and poverty. She faces the challenges of having a family while also feeling stuck and suppressing the artist that is inside her. I have a lot of great respect and admiration for her.”

After the opening scenes, the play jumps three decades ahead. Sonia has passed away; William is aging and ill with multiple sclerosis. The two sons struggle to care for their father and face difficult choices about their own dreams and lives. Sonia appears to William as visions, and the Boston Globe writes “Jean-Baptiste brings a quiet radiance to these scenes.”

This is Patrice’s first time working with the Lyric Stage Company, located at 140 Clarendon Street in Boston. Broke-ology runs until April 23.