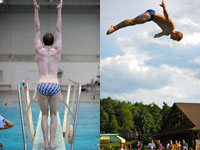 Milton divers Josh Ellis (I) and Matt Rohrer (I) made impressive showings this year at the New England Prep School Swimming and Diving championship tournament. Out of 30 divers selected from all over New England, Josh placed second with 449.1 points, and Matt placed fourth with 435.75 (missing third place by only two points). Contributing to the team’s success was new diver Colby Parsons (III), with a score of 279.35. The boys’ collective scores made Milton the highest scoring diving team in the tournament.

“We saw six or seven divers who were really competitive in the top spots this year,” says Josh. “Typically there are one or two clear stand-outs, but the competition was much closer this year.”

“Having been to a few tournaments, and knowing a lot of the swimmers and divers from other schools, made this year much more fun,” adds Matt. “The atmosphere was competitive, but comfortable.”

Matt and Josh began their diving careers at Milton, each transitioning from a gymnastics background. “People think that gymnastics helps in diving, because of the flipping, but they’re very different sports,” says Matt. “Getting accustomed to the spring in the board and how you position your body is the tough part. Essentially, you have to break some habits that are natural for gymnasts.”

“Some of the apparatus in men’s gymnastics is pretty violent and rigid,” adds Josh. “Diving—using the board—is more graceful.”

Diving coach, and Milton’s chaplain, Suzanne DeBuhr has been coaching these boys since the start of their career. “I am incredibly proud of their achievements,” she says. “I am grateful to have had the opportunity to work with these talented athletes and wonderful human beings.”

Josh and Matt will continue diving in college—Josh at Bowdoin and Matt at Tufts. “We’ll be moving up to the three-meter board next year, in addition to the one-meter, which will be a big shift,” says Josh. They’re ready.