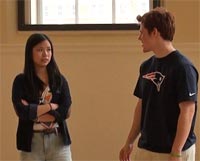 This weekend’s 1212 play, Lovers’ Quarrels, was Moliere’s first successful comedy, originally published in 1656. Fourteen Milton actors will perform the English translation by Richard Wilbur. The script is challenging: The entire play is written in rhyming couplets. Performing arts department chair and director, Peter Parisi, says that the play is a light and fun story, though with a complicated plot: A girl disguises her gender to obtain an inheritance, all while loving the boy who is due the inheritance and is courting her sister.

The tradition of Milton’s 1212 Plays began over 30 years ago in room 1212 of Warren Hall. The performances evolved from play readings to fully-staged productions under the direction of late faculty member Nina Seidenman. When Warren Hall was renovated, and room 1212 became an English classroom, the productions relocated to Wigg Hall. The space may have changed, but the philosophy is the same: intimate productions with small casts, minimal technical demands, and challenging material for both actors and audience.