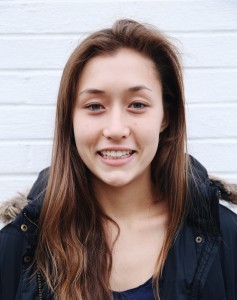 Malia Chung (III) was one of two winners of the 12th-annual Helen Creeley Student Poetry Prize. Malia submitted two poems for consideration and a group of semi-finalists were invited to read their poems to judges as part of the selection process. The winners represented “exceptional quality of poetry, along with pitch perfect presentation and ability to command the audience.”

Malia began writing poems seriously in eighth grade. Last year, she won a Scholastic Writing Gold Key Award for poetry. She is taking Mr. Connelly’s Creative Writing class, where she worked on the two submitted poems for the Creeley Prize, “Crabbing in Bethany, Delaware” and “My Great-Grandfather’s Lithuanian Cavalry Stirrups.”

“There is something different about writing for this class; I don’t see it as homework. You can write on your own time and when you are inspired, which I really enjoy,” says Malia.

Malia says she takes her time when she writes. “I go into a double consciousness where I rethink of everything differently from how I originally saw it. I like to reread to make it more in-depth. I usually go through two or three different phases before I have the first draft that then gets workshopped in class.”

Malia says she was nervous about reading in front of the judges, but winning the award “was a huge honor and so exciting. It opens the door for opportunities for readings in the future.” The Helen Creeley Student Poetry Prize honors one or two Massachusetts public or private high school students each year. Helen Creeley was the poet Robert Creeley’s older sister and his much admired first mentor.

He told me how he caught
blue crabs off the dock sinking
in wet sand and beer cans behind the beach cottage, splitting
the haul with his immigrant mother who cooked until
the pale bodies flushed red. He used to lure them with chicken
necks bought for ten cents a piece, money
from returnable Coke bottles stolen
from the neighbors’ yards. He remembers still
how she ate them: slurping the soft
flesh from the inner skeleton, the hack
and hiss of screen doors shuddering in their frames,
blackened nails from umpteen packs of Merits,
the “Who’s your boy?” and “What you looking at?”
Red-faced Floyd West lighting stray cats afire,
the Austin boys belt-whipped on their front porch.
This was being mixed in rural Delaware.
Sheryl wheezing in her yard, hair in curlers, bloated ticks
hanging from dogs’ ears, and the ex-Green Beret who snuck boys
his homemade wine. This was to be mixed
up in rural Delaware in the ‘80s.
My father promises we’ll go crabbing
sometime, buy the necks
and stand above the marsh stream on the wooden bridge
in another state.
He tells me: the trick
to crabbing is tickling their white stomachs,
loosening their muscles on the net until, resigned,
they let go.