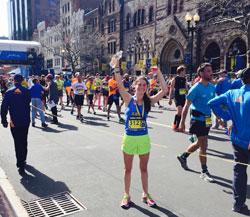 Many hours of training, planning and fundraising came to fruition on April 21, Patriots’ Day, for four Miltonians who ran and completed the 2014 Boston Marathon. Math faculty member and boys’ track manager Matt Simonson covered the infamously difficult route in two hours and 44 minutes, placing 534th in a field of more than 35,000. This was his fourth Boston marathon and sixth overall.

“The Boston Marathon is the number one running event in the country in which ordinary amateur runners and elite athletes run the same course together, sharing similar experiences,” says Matt. “It’s old-fashioned coming together—a million people cheering for complete strangers. Strangers helping strangers achieve their goals. Nothing is more beautiful than that.”

Crossing the finish line in just under four hours, student Abby Lebovitz (I) ran in memory of Merritt Levitan ’13. Mrs. Levitan and her daughter, Hunter, greeted Abby at the finish. Abby trained and ran the race with her mother, Lisa Lebovitz.

“A lot of people have asked me how I ran it, and I know it’s because I ran for something and someone I care about,” says Abby. “Training with my mom was a special thing for us to share, and I couldn’t have done it without her. After the race, Tom Brady and Giselle walked by us and waved, and Mrs. Levitan said it was Merritt congratulating me. Merritt will always be present in my life, no matter what I’m doing, and the marathon was a special experience for me to share with her and her family. I know Merritt would do the same, and probably something crazier, for me if she was still with us.”

Athletics faculty member Matt Petherick has run seven marathons; this was his fourth time on the Boston course. This year he ran and finished the race with his wife.

“The race meant a lot this year,” says Matt. “I was disappointed I didn’t get to finish last year with everything that went on, so getting a number and finishing this year was emotional. The crowd was unreal—so supportive and encouraging along the whole route. Not to sound cliché, but that illustrated what the marathon means to the community. I saw many people I knew along the route, but no group was more vocal than the Milton students I saw prior to Heartbreak Hill. They provided a much-needed boost at a tough portion of the race. I can’t thank them enough.”

This was Teresa Rodriguez’s first and “only” marathon, which she ran on behalf of the Boys’ and Girls’ Club of Dorchester, raising over $5,000. Teresa is Milton’s K–8 director of multiculturalism and community development

“I ran the race to bring resources to a part of the city that often is overlooked,” Teresa says. “Violent incidents in Dorchester, Roxbury and Mattapan don’t bring the media attention that violence in other parts of the city elicits. My cousin works at Neighborhood House Charter School, where Martin Richard was a student. I wanted to do something to show that our city will not be defined by terror.”

Teresa trained with members of her charity team, and they prepared by running the course’s hills during the cold winter. On race day, however, the course grew uncomfortably warm for runners in the afternoon; Teresa says the crowds were key to keeping her motivated.

“People yelled your name to encourage you, and I saw many colleagues from Milton (and two advisees) who gave me energy, water, jellybeans and hugs to lift my spirits and get me through. At the finish, my colleague Nancy McCuen (Grade 1) put the medal around my neck. It was a fabulous day, and the generosity from so many people was amazing. Even the police officers were giving us high fives in the last mile of the race.”