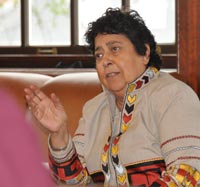 Razia Jan, founder of the Zabuli Education Center in Kabul, Afghanistan, spoke to students about her improbable achievement: under difficult political, economic and cultural conditions, opening a K–8 school for girls. Mrs. Jan was this year’s Margaret A. Johnson Speaker, a series that brings noted female leaders to campus each year.

“At the beginning, building a girls’ school in Afghanistan seemed as difficult for me as going to the moon,” said Mrs. Jan. “I am just one person, but I thought it was important to do something.”

Born in Afghanistan, Mrs. Jan moved to the United States in 1970. She was the proprietor of a small tailoring business in Duxbury, Massachusetts, for 20 years. Her son, Lars, graduated from Milton in 1996. Her life changed after September 11, 2001, when she rallied her adopted New England community to send over 400 homemade blankets to rescue workers at Ground Zero. Her efforts expanded to sending care packages to U.S. troops in Afghanistan and coordinating the delivery of over 30,000 pairs of shoes to Afghan children through the military’s Operation Shoe Fly.

In 2002, Mrs. Jan moved back to her native country and bought land where a boys’ school had stood. Determined and unwilling to back down, she opened a K–4 school five years ago with 108 students. One of her biggest hurdles was convincing the local population, especially the men, of the value in educating girls.

Today, the school has 14 teachers and more than 300 students. The cost of operating and expanding the school is a constant concern, and Mrs. Jan is fund raising during her visit to the United States.

Mrs. Jan is a member of the Interfaith Council and No Place for Hate, as well as a member of the board of directors at Jordan Hospital. She has received awards for her humanitarian work, including the 2007 Woman of Excellence award from Germaine Lawrence Inc., multiple Rotary Club International Peace Awards, and certificates of appreciation from the Army Corps of Engineers and the American Legion. She has spoken on women and children’s issues at venues in New York, Massachusetts, Washington, DC, and Afghanistan.