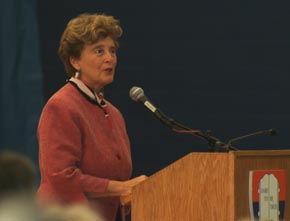 When Alexandra Desaulniers (I) visited the White House as an eight-year old, she wondered why all the portraits on the walls were of men. Alex wrote a letter posing her question to Marie Wilson, founder and president of the White House Project. Ms. Wilson visited Milton on January 31 as this year’s Margaret A. Johnson Speaker, which brings noted female leaders to campus each year.

Introducing Ms. Wilson, Alex described her as “an advocate of women’s issues for more than 30 years, [leading]…in her efforts and dedication to educate the American public on a woman’s capacity to lead.”

Former president of the Ms. Foundation for Women, and now working on major education initiatives through the White House Project, Ms. Wilson has had a hand in several well-known programs that highlight the importance of women’s roles in leadership positions in our country and around the world. Ms. Wilson is the co-creator of Take Our Daughters to Work Day, which she told students “is the largest public education campaign in the history of the nation.” She also, in conjunction with Mattel in 2002, introduced President Barbie to the world. “I know you’re thinking, ‘International security and President Barbie—an interesting combination,’” she laughed, “but we have noticed the connection between pop culture and what goes into the development of leadership. It’s interesting to go into popular culture and take into account the things that people touch, watch and hear. There is a real strategy in a doll.”

Ms. Wilson has been at the head of the White House Project since it began in 1998. “I started the White House Project because women’s leadership in America is stuck,” she said. As Alex explained, “The project has performed innovative research and established numerous initiatives in the past nine years, highlights of which include the convening of women CEOs and executives for two national leadership summits, a conference of international women leaders, a partnership with The Girl Scouts of America to launch the Ms. President patch, and groundbreaking research centering on influencing popular culture.”

Ms. Wilson told students, “The United States is 68th in the world as far as women in leadership, and one of the main problems is that people think that women are already IN roles of power across the board. Not true. What we need are women in numbers. Numbers are what make things normal. For instance, when one woman is in a position or a race, she is always looked at through the lens of gender. Two women becomes a catfight, or a comparison. But three women really messes them up. With three women it stops being about gender and starts being about agenda. When there are enough women in a group, they change the product and the process of what goes on.”

Ms. Wilson implored students to encourage one another, to speak up and to advocate for women with the interest and passion to lead. “Young boys and girls do pay attention, and because of this, we need to ask, ‘What parts of the country are being left out? What voices are left off the table?’”

Ms. Wilson has extensive leadership experience herself: she was the first woman elected to the Des Moines City Council as a member-at-large in 1983, and she served as an official government delegate to the United Nations Fourth World Conference on Women held in Beijing, China, in 1995. She is co-author of the critically acclaimed Mother Daughter Revolution and author of Closing the Leadership Gap: Why Women Can and Must Help Run the World. She has been profiled in The New York Times and has appeared on The Today Show, CNN and National Public Radio.