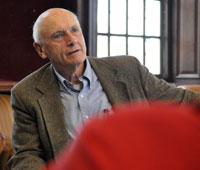 Dr. Donald Johnson—English professor and poet in residence at East Tennessee State University—was this fall’s Bingham Visiting Reader. Dr. Johnson met with students in Class I and II, and in honor of Veterans’ Day, he began his reading with two poems that are about soldiers and war. The first, “The Sergeant,” was inspired by his father, a World War II veteran who later commanded a squad of the Honor Guard that traveled to West Virginia. The second poem he read, titled “Point Lookout, Maryland” recalled the American Civil War, and Dr. Johnson explained: “In East Tennessee, memories of our Civil War are still quite alive, quite vivid in some families. Our state was divided in the Civil War—many families were divided.”

Described by his peers as the “dean of sport literature” and “a master craftsman,” Dr. Johnson draws inspiration these days from the natural world, and from taking close notice of the details of life. He read several poems from his most recent book of poetry,More Than Heavy Rain—poems that bring to light his home on the Watauga River, his family, and observations of life lived outside.

Dr. Johnson has been a faculty member at East Tennessee State University for 30 years, where he served as English department chair for six years and Dean of the College of Arts and Sciences for seven. An avid sports fan and accomplished sports writer, Dr. Johnson served for 16 years as general editor of Aethlon: Journal of Sport Literature. He has published many articles on literature and sport in American culture and is the author of The Sporting Muse: A Critical Study of Poems About Athletes and Athletics and the editor of Hummers, Knucklers, and Slow Curves: Contemporary Baseball Poems.

The Bingham Visiting Writer series is made possible by the generosity of the Bingham family. Established in 1987, the fund supports educating students in creative writing and bringing to campus professionals who have made careers of the craft of writing.