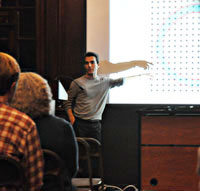 “You can’t fudge math,” Neil Katuna ’05 said to students and faculty on Monday, and he thinks that is part of its appeal. Neil shared his experiences of a career in math as part of a new speaker series, Pi Talks: Mathematical Conversations With Dessert, organized by the math department.

Neil believes that “there is beauty in math,” and to illustrate he began with prime numbers, presenting different theorems and proofs. He spent time on the Gauss circle problem, asking students how to estimate the number of integer lattice points there are in a circle centered at the origin and with radius r.

“Mathematics is about asking simple questions and coming up with elegant arguments,” said Neil. “It is great stuff.”

Heather Sugrue, math department chair, hopes the speaker series is a way “for students and adults to gain insights about math that go beyond academia; for example, to see what you can do with math in a job or career.”

Neil discussed an internship with Symantec Research Labs where he worked on technology that uses algorithms to find malicious or unwanted content on a Web page. He also worked for the National Security Agency on classified problems involving Markov chains—a mathematical system that undergoes transitions from one state to another, where the next state depends on the current state, not the ones preceding it. Neil cited Google’s search engine and text auto correction as examples of technology using Markov chains.

“Mathematics is unique among the disciplines, because you have to have a comprehensive understanding of every theorem,” said Neil.

Today, Neil is an associate for the quantitative research risk analysis group at Loomis, Sayles & Company in Boston. His work today mainly involves linear algebra. Neil majored in pure mathematics at Princeton University and earned his master’s in mathematics at UCLA.