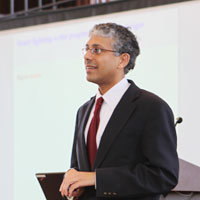 Dr. Sanjoy Mahajan gave math educators a taste of his “street-fighting mathematics,” a teaching approach that involves the “art of guessing results and solving problems without doing a proof or an exact calculation.” Dr. Mahajan was the keynote speaker at the Math Teachers Conference hosted by Milton’s math department. Fifty-five educators from independent, public, Catholic and charter schools around New England attended the daylong event.

Dr. Mahajan argued that rote learning in math leads to students solving problems that they don’t understand. In one study example, students in Grades 4 through 6 were asked to solve 6×3. Students easily knew the answer. But when asked to explain the answer in the form of a story, a typical answer was, “There were six ducks swimming in pond. Three more ducks arrived and now there were 18 ducks.”

“This is math without meaning. Some students think math is numbers you push around, mix up, and some kind of answer will pop out,” said Dr. Mahajan.

Dr. Mahajan cited studies that show the use of calculators harms student performance. “Students need to turn on their minds, not their calculators. When students rely on calculators, they begin thinking like computers, which is a big problem. Rote learning combines the worst of human and computer thinking. By relying on their mind instead, students will develop intuition and good judgment.”

The rest of the day included 36 short sessions presented by Milton faculty and some of the conference attendees. Topics included “Using Fathom in Stats,” “Building a Rollercoaster,” and “Integrating Coding into Algebra II.”

“We wanted to create a conference where the main goal was to collect as many good ideas as possible,” said Heather Sugrue, math department chair. “We don’t reflect every day on all the good things that happen in our classrooms, but each of us has at least one idea we like, use often, or want to try out. Sharing these thoughts was an important part of the day.”

Dr. Mahajan is an associate professor of applied science and engineering at Olin College. He is on leave while teaching “Street-Fighting Mathematics” as an edXonline course at MIT. He obtained his Ph.D. in theoretical physics from the California Institute of Technology in 1998, and has undergraduate degrees in mathematics from Oxford University and in physics from Stanford University. In 2006 he became an associate director of MIT’s Teaching and Learning Laboratory. His book, Street-Fighting Mathematics: The Art of Educated Guessing and Opportunistic Problem Solving, is available under a Creative Commons Noncommercial ShareAlike license.