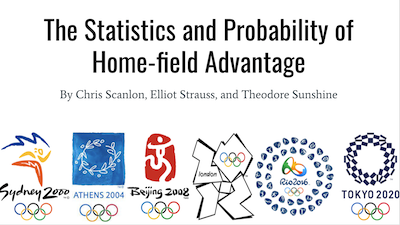 With impressive accuracy, a group of Class I students were able to closely predict Japan’s total medal count in this summer’s Olympic Games.

Using what they learned about statistics and probability from Math Department faculty member Terri HerrNeckar, prior to the start of the games Christopher Scanlon ’22, Elliot Strauss ’22, and Ted Sunshine ’22 studied the “home-field advantage” for Olympic host nations to project how many medals Japan would win. Home-field advantage commonly refers to an athlete’s ability to outperform or win more often at their home facilities.

“We seized the opportunity to apply mathematics to a world event,” said Scanlon. “Given that Olympic city selection is announced no later than 11 years in advance, a host nation would have two Olympics to prepare for their eventual host games. We examined the last three Olympic host nations’ (China, Britain, and Brazil) performances in the two games leading up to events in their home countries. Referencing official Olympic data, we measured the average increase in selected athletic categories across each event. Together, this data allowed us to determine the approximate increase in a nation’s total medal count for their host Olympics.”

HerrNeckar had given students the opportunity to do an ungraded project pursuing any topic of their interest. The students found research on home-field advantage from previous Olympics and decided to make their own predictions. Traditionally, host nations tend to invest more funding in their own Olympic programs during hosting years, and they typically field higher numbers of athletes for games in their country than they do for games hosted by other countries. Lower qualification standards for host-nation athletes may also be a factor, as host nations are guaranteed certain spots in events, the students said.

They also factored in Russia’s 2016 doping scandal, figuring that the diminished presence of Russian athletes in this year’s games could account for more gold medals for other countries, including Japan. Prior to the start of the games, the students predicted that Japan would win 22 gold medals— but could reach the high 20s or low 30s due to the ban on athletes competing on behalf of Russia. Japan won 27 gold medals.

The students’ overall medal count prediction for the host country was 58. Japan ultimately won 57. The students were impressed with the accuracy of their work.

“More than anything, this research demonstrates how the Olympic Games are not just an athletic competition but a competition for public perception,” Scanlon said. “While each nation’s athletes battle for themselves and their countries, the host nation attempts to prove they belong among the best on the world’s biggest stage.”