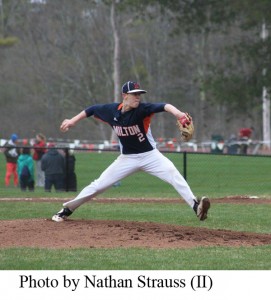 An exciting season is underway for the boys’ varsity baseball team, with many close games. The most exciting accomplishment of the season occurred on April 30 against Lawrence Academy when Matt Tabor (II) pitched a perfect game, one of the most challenging and impressive achievements in sports. A perfect game is defined as a game in which no runner reaches first base.

“Pitching a perfect game is a once in a lifetime experience,” says Sam Murray (II).

In fact, Matt is the first pitcher Mr. Petherick has coached who threw a perfect game. Matt said that he did not have high expectations going into the game because Lawrence was undefeated. Instead, he “was focused on being the best I could be and going out to get a ‘W’.”

“It was honestly such a surreal experience, and I couldn’t have done it without the support and play of the guys behind me. Isaac Fossas (II) and Gavin Baker Greene (I) made huge plays that saved the perfect game,” says Matt.

Sam Hitt (I) says that Matt had “many great outings this year and has been vital to the team’s winning record.” Sam also described Matt as one of the best pitchers in the ISL. Matt’s ability to throw 85 miles per hour pitches has helped the team in countless ways so far this season. According to Matt, who committed to play Division 1 baseball at Elon, the rest of the baseball team’s season looks very promising. The game against Lawrence will definitely be remembered as a career highlight for not only Matt, but also the entire baseball team.

A version of this article was originally published in the Milton Measure.