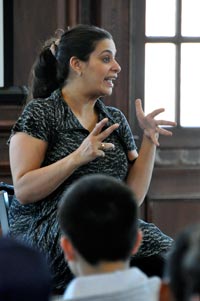 Maysoon Zayid—a comedian, actress and activist—warmed up her student audience this week with lots of funny stories, and she also conveyed an important message. Ms. Zayid was the 2015 Margaret A. Johnson speaker, a series that brings noted female leaders to campus each year.

Born with cerebral palsy, Ms. Zayid is a powerful advocate for the disabled. She told stories about growing up in the suburbs of New Jersey, where she was accepted for who she was. But as a theater major in college and a struggling actress pursuing a career, Ms. Zayid realized that disabled people were almost nonexistent in the entertainment industry.

“Hollywood has a bad habit of casting able-bodied people to play disabled people,” said Ms. Zayid. “Then these actors win big awards and everyone says how inspirational they are. And on television, people with disabilities are the largest minority in the world.”

Ms. Zayid also spoke about how “Internet trolls” use social media to vilify anyone who is different from them.

“The world is broken, but together we can fix it,” she said. “Including people is important not because we have to, but because it makes for a better world. Don’t let other people define you. Clap for yourself, and other people will join you.”

Ms. Zayid was a full-time contributor on Countdown with Keith Olbermann and has appeared on Comedy Central, PBS, CNN, HBO, MTV, ABC and Huffington Post Live. She is a recurring columnist at The Daily Beast and was a speaker at TEDWomen 2013. She is also the co-founder and co-producer of the New York Arab-American Comedy Festival.

A delegate at the 2008 Democratic National Convention, Ms. Zayid was named one of 21 leaders of the 21st century by Women’s eNews. She is the founder of Maysoon’s Kids, an education and wellness program for disabled and wounded Palestinian refugee children. She spends several months each year in Palestinian refugee camps, running workshops for disabled and orphaned children, using art to help them deal with trauma.

Founded in 1981 by an alumna of the Milton Academy Girls’ School, the Margaret A. Johnson Lecture honors Ms. Johnson’s 31 years of dedication, leadership and service to Milton. The series introduces students to women distinguished by their professional achievement. Former speakers have included elected leaders, national and international journalists, heads of broadcast and print media, authors, actresses, filmmakers, economists and business leaders.