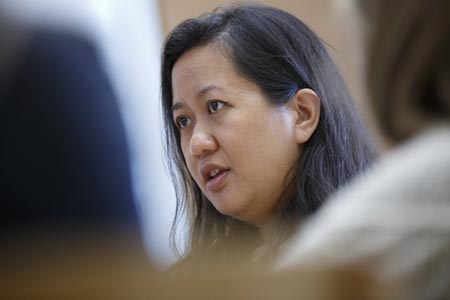 “At the risk of sounding sentimental, I feel like I’m living my dream right now,” says Kristine Sydney, who joined the English department this year.

Kristine has known Milton for a while: Mathematics faculty member and Outdoor Program director Kendall Chun is a longtime friend who officiated Kristine’s wedding. Her familiarity with Milton kept the School in her mind when she considered moving on from her previous job. Milton’s commitment to diversity made it an even more attractive place when she had her daughter, who is nearly 2 and multiracial.

The reality of Milton has measured up for Kristine, who is teaching Class IV English, Class III Perspectives and Class I Themes in Contemporary World Literature. The freedom Milton gives its English teachers to select student reading has been powerful, she says. One section of her students began the year reading Michael Ondaatje’s The English Patient, her favorite book largely in part of one line: “Do you understand the sadness of geography?”

Another book her students have loved was Kamila Shamshie’s Home Fire, a retelling of Antigone through the present-day perspectives of Pakistani immigrants to the United Kingdom.

“I love a good origin story,” Kristine says. “It’s a chance for me to include immigrant voices, which are very much a part of the fabric of American life, but are not always represented in American literature. It’s such a gift to be able to explore that in a diverse classroom, but also in this cultural and political landscape, it feels necessary to make sure that those voices are part of the conversation.”

Kristine has been impressed by Milton students’ interest in literature’s relevance to history and current events, and their empathy for characters who are unfamiliar to them. “They are not afraid to share their emotional reactions in addition to their intellectual reactions when they’re talking about a book, and that’s really refreshing.”

Born in the Philippines and raised in Saudi Arabia, Kristine’s exposure to American life came from the American compound for the Saudi Aramco energy company, which felt like a “Leave it to Beaver” set adjacent to the world’s largest petroleum company. While their family lived just outside the compound, Kristine’s father worked for Aramco and her mother taught at an international school.

After seeing the film Dead Poets Society in the summer before eighth grade, Kristine told her parents she dreamed about going to boarding school in America. To her surprise, they said she could. She attended Kent School before receiving both her bachelor’s and master’s degrees at Middlebury College. She jokes that when she arrived in New England for the first time, “Suddenly, Robert Frost made sense. It was exactly what I had imagined.”

Kristine remains inspired by her sophomore-year English teacher from Kent—Mr. Scott, who also advised the Kent News—who taught her how to read not just for plot, but for the richness of language and context.

During college breaks in Saudi Arabia, Kristine worked as a substitute-teacher at the Philippine Embassy School in Jeddah, where her mom was head of school, and she fell in love with teaching. The break schedule of American schools also allowed her to spend time with her youngest sister at home, who was born just before Kristine went to Kent. “Teaching was the only job that allowed me to bridge that temporal and geographic gap between us,” she says.

Kristine taught at the Wheeler School in Providence, R.I., before coming to Milton, and she previously taught at Cushing Academy.