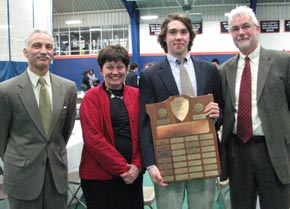 Milton’s hockey captain, Michael Matczak (Class I), was named the 2006–07 Flood Shield winner by the ISL Keller coaches. The coveted award is given to “the player whose enthusiasm for hockey and true devotion to the game is marked by his playing ability and physical toughness, yet whose competitive spirit is balanced by emotional control and a desire to play within the rules of the game.” Michael was presented the award by Milton’s hockey coach, Paul Cannata, during the School’s Winter Athletes’ Dessert in the Fitzgibbons Convocation Center on Wednesday, February 28. Michael also received the Milton Hockey Award and was named All-League by the ISL Keller coaches.

“Michael is well-deserving of this recognition,” said Paul Cannata. “In addition to being one of the top performers in prep hockey, he is a strong leader and his character is outstanding. Yale is getting one heck of a player and Michael will be sorely missed at Milton, although he leaves distinguished fingerprints on our hockey program and the School.”