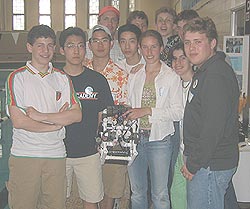 The 20-minute pool mission involved an 8 to 12-foot dive on a Titanic mock-up aided only by navigation from the mounted, underwater camera on the vehicle. M.A.R.O.V. I.’s mission was to find, gather and bring to the surface 20 ‘c-probes’ hidden within the confines of the eight-chambered, submersed structure. The M.A.R.O.V. I gathered 16 of the 20, colored-coded probes (with varying point values), earning 44 out of a possible 50 points—easily outdistancing its competitors for the top mission score of the day. At the controls of the M.A.R.O.V. I were Ben Hur (II) and Lenny Mazzone (II), along with operational assistants Clare Bernard (III) and David Wu (III) by the poolside.

Milton’s R.O.V. team began its work in early March with brainstorming and white board sessions. They began in earnest with the final design phases and construction on April 1. Modifications began after the first of two trial test flights at UMass-Boston’s pool.