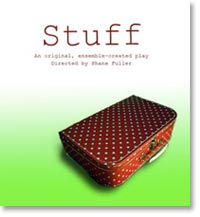 This spring’s main stage production, Stuff, is a devised, or ensemble-created play, meaning that when Shane Fuller, director and performing arts faculty member, presented the show to the cast, no script existed. “Most devised productions begin with a complete idea,” Shane explains, “or are based around another work, but this show began with just an image: suitcases.” From there the cast discussed where to go next. What they’ve developed is a collection of tales—approximately 20 short bits that include poetry, movement, short stories written by the cast members, and two longer stories of Shane’s creation.

“The movement portions are the glue that brings the piece together,” says Shane. “Kelli [Edwards, Milton’s dance teacher] worked with us on the movement elements of the show, and the effect is that of people moving through an airport—it’s very pedestrian.” The show will be performed in the round, meaning that the audience will surround the performance on all sides.

“The show explores people’s ‘stuff’ or baggage—literal, emotional, social,” says Shane. “We all have stuff that we’re trying to work through, as humans. The show is ultimately about identity: our stuff can define us, make us, and can ultimately become who we are.”

The cast and director plan to stay after each performance to engage with the audience in a “talk back” session that allows the audience to ask questions, make comments on the play, and to have the actors involved provide more insight into what went into the creation of this project.

“A devised play is in some ways more difficult than working from a script that’s already written, because you spend the first half of your rehearsal time figuring out what the heck you’re going to do,” Shane says. “Producing a devised play takes actors who are committed to the process and to the creation.” (The cast of Stuff includes seven students representing Classes IV through I.) “The challenge is worth it, because in the end the students involved truly own the production. It’s theirs, from start to finish.”