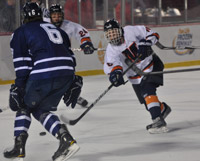 On the hallowed grounds of Fenway Park, Milton Academy’s boys’ hockey team faced off against Noble and Greenough as part of Frozen Fenway 2012, a regional showcase of high school and collegiate hockey teams.

With temperatures dipping into the low 20s, Mustang fans cheered from the stands as the sun slipped down behind the Green Monster. Milton’s Jimmy Haddad (II) scored in the second period and Jon Franco (I) scored on a power play in the third, but the game went to Nobles 6-2. A great afternoon of hockey on the Red Sox stomping grounds.

View photos of the game.