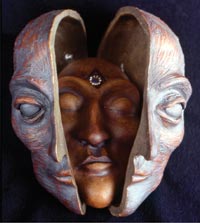 “Esta Carnahan’s ceramic sculptures evoke an ancient, pagan and mythical world,” says Milton’s visual arts department chair, Gordon Chase. “Her face forms enclosed within other face forms challenge the viewer to dig deeply into a Jungian psyche that is both personal and collective. This artist makes forms that link the old and the new in the expression of what is ‘original.’ She makes forms that look alive and that defy rationality.”

Personal Mythology runs from February 9 to March 9 in the Nesto Gallery. An opening reception to kick off the show is scheduled for Tuesday, February 9, from 5:30 to 7 p.m. Located in the lower level of the Old Science Building, the Gallery is open weekdays from 8:30 a.m. to 3:30 p.m. To learn more about Esta Carnahan, visitwww.estacarnahan.com.